What is Polyphasic Sleep, and is Eight Hours of Shuteye Really Necessary?

There is a thirst for productivity in our culture; a nearly palpable sense of, "time is money." Paradoxically, with this relatively recent shift in cultural values, people are reverting back to a kind of "ancestral," perhaps even primal sleep cycle. This method of catching ZZZ's is most commonly referred to as polyphasic sleep.

But it's not just eccentric entrepreneurs who are breaking the shuteye status quo. According to Live Science, more than 33% of American adults wake up in the middle of the night on a regular basis. While some doctors continue to diagnose this pattern as "middle-of-the-night insomnia," there is compelling evidence from both historians and psychiatrists that a single eight-hour sleep session may not be the best answer for our body and mind.

To understand polyphasic sleep, it's important to understand our culture's current ideal for optimum rejuvenation. The traditional eight hours of shuteye we hear about most often today is referred to as monophasic sleep— just one sleep session and then you're awake for the day.

Conversely, polyphasic sleep is about segmenting your slumber into multiple phases. Different sleep schedules such as Biphasic, Dymaxion, Everyman, and Uberman each consist of several naps and/or core sleep sessions (deep sleep and REM) a day. 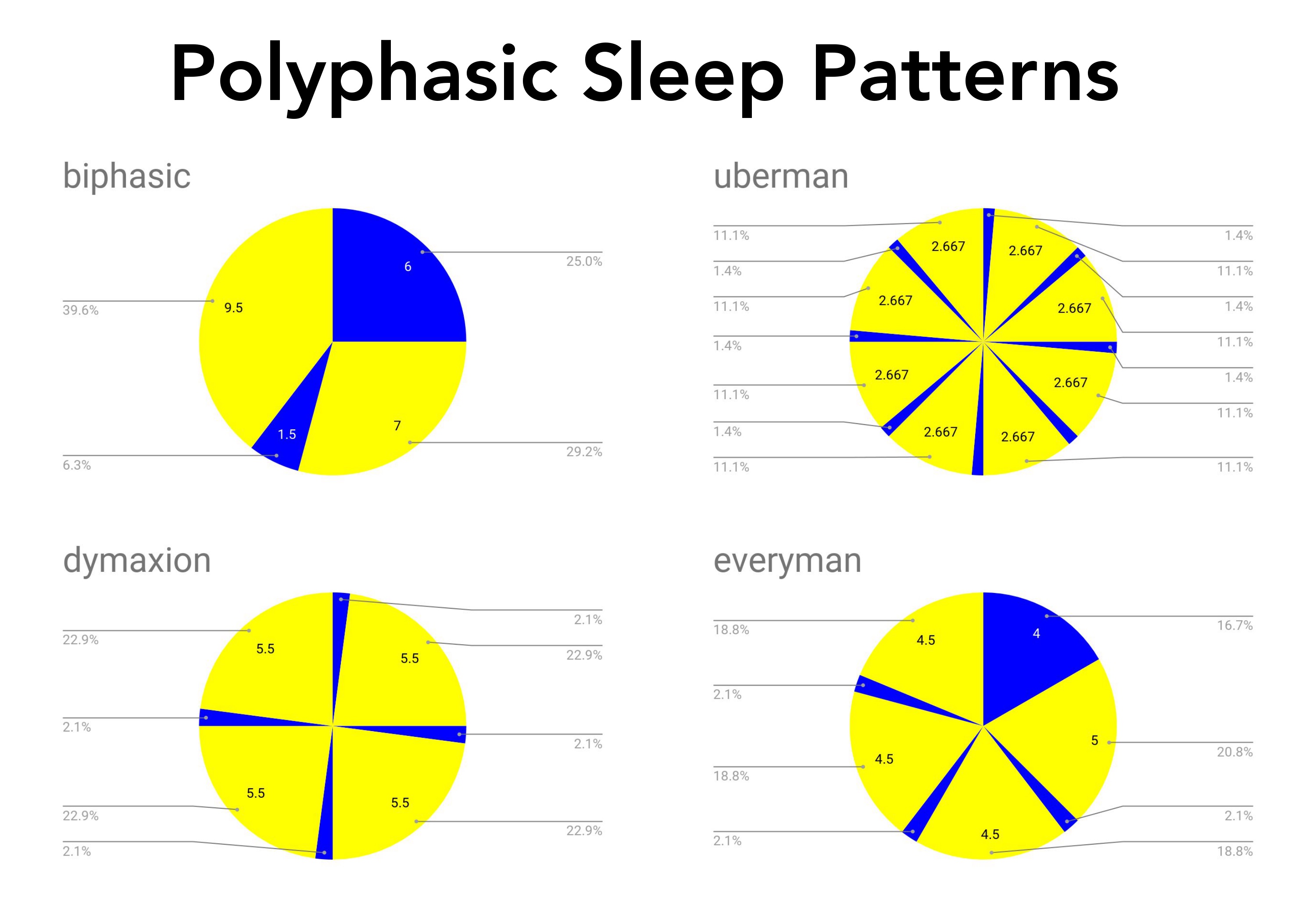 Now labeled as an "alternative" sleep schedule, polyphasic sleep was once the norm. In fact, researcher Roger Ekirch, historian and author of At Day's Close: Night In Times Past, said in an interview, "The dominant pattern of sleep, arguably since time immemorial, was biphasic... Humans slept in two four-hour blocks, which were separated by a period of wakefulness in the middle of the night."

These weren't brief phases either. Many times people would actually get up and take on their daily (or in some cases nightly) tasks, visit with neighbors, talk with their family, etc. Sleep schedules changed drastically as the Industrial Revolution brought forth an artificial sense of extended daylight with the advent of the light bulb. According to Psychology Today, too much bright light stops our bodies from releasing melatonin, a hormone responsible for regulating sleep.

You may be familiar with some of the famous advocates of polyphasic sleep, such as Leonardo da Vinci, Thomas Edison, and Nikola Tesla. Both da Vinci and Tesla followed the extreme polyphasic Uberman method, requiring only 2 hours of sleep a day, segmented into 20-minute naps.

According to Jessa Gamble, author of The Siesta and the Midnight Sun: How Our Bodies Experience Time, there is an "inexhaustible supply of people who want to experiment with their own sleep." However, despite historical accounts that tout the benefits of polyphasic snoozing, many scientists agree that it may not be the healthiest option. Still, as Eduardo Galeano once said "History never really says goodbye. History says, "See you later.""

Findings from a massive study by SuperMemo found that ultimately, the vast majority of people are not built to sleep in patterns other than monophasic or biphasic sleep schedules. Findings indicate that more extreme sleep cycles like Uberman or the Everyman actually cause similar problems to those seen in shift workers and jetlagged travelers.

With this evidence in mind, biphasic sleep, which deviates the least from the contemporary eight-hour model, has been shown to have some significant benefits. Anecdotal evidence seems to indicate that biphasic sleep can actually maximize creativity and alertness in highly innovative individuals. It is now suspected that the creative genius of historical figures such as Tesla or da Vinci, who were said to have ascribed to the "Uberman" model, actually may have been caused by mania or insomnia.

If you take a nap during the day, don't worry. Naps are safe, healthy, and sometimes all you need to stave off your sluggishness. A study at NASA on sleepy military pilots and astronauts found that a 40-minute nap improved performance by 34% and alertness 100%. In addition to performance, a short session of shuteye can help with:

To Answer the Question

Research by Scientific American found that only 5% of the population can get by on just six hours of sleep. That being said, if you're deciding between cycles, monophasic and biphasic are going to be your best bet, unless you’re in the small minority.

Regardless of which sleep schedule you choose, the importance of sleep cannot be underestimated. That's why AcousticSheep has designed the world's most comfortable SleepPhones. If you're interested in falling asleep faster and receiving a more restful night's sleep, check out our most popular models below.

Shop The Most Comfortable Sleep Headphones