We just won the 2014 Governor's Impact Award for Exports (#imPActwards). It was pretty amazing. I can't believe we won a second year in a row after we won for Entrepreneurship last year. We weren't expecting it, and we're so happy! The Impact Awards are given to the top businesses in five different categories after a nomination process in January. Five finalists are announced in March, and the winner is announced at the end of May.

Jeff, I appreciate all of you and your team's hard work to make sure the shipments go out accurately and on time. Lisa and Kristin, thank you for helping our international customers with what they need. They can see that we are friendly and easy to buy from. The rest of our employees (including our new marketing team) are fantastic and will allow the business to ramp up even faster!

Sanat, Sahil, and Dan, I'm very excited about the international markets you have helped us open recently and the amount of business through your channels. I didn't think we would win based on the export sales in 2013, especially when we are now doing so much more in 2014! Richard and Luke, we are looking to you for continued business growth in Europe.

We were one of three companies invited to sit with the Governor. I talked with him about how as a doctor with no business background, I relied heavily on the help of the state-funded free services such as the Penn State SBDC, Seda-Cog, Northwest Commission, and Gannon SBDC to teach us business concepts and how to export our products. The networking and education were critical to our success. He responded and said that he brought the different groups together to make sure business resources were communicating more with each other and to reduce duplication of effort. 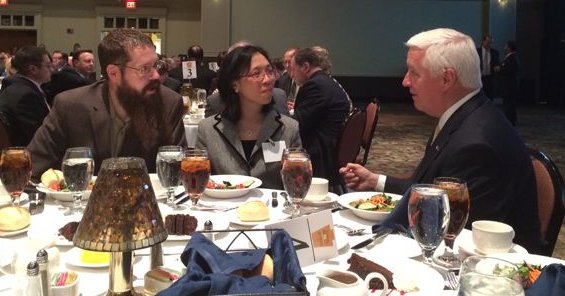 I also told him my story of how I couldn't sleep after waking up at night and introduced our line of SleepPhones and RunPhones headphones. He said his wife watches TV in bed, which he doesn't do. So I will be sending Susan Manbeck Corbett a SleepPhones Wireless with a Bluetooth transmitter set, which will be released for the holidays this year. Apparently he mentioned our story to other people as he was walking around. People were asking about our products after the event.

Jason talked to him about his son who will be opening a new branch for EA Software (the huge video game company) in Pittsburgh. I think he is proud of his son. We also talked about education and how important it is to grow a strong economy. He said that Pennsylvania produced 12,000 teachers annually, and the State only needs 3000. He also said that guidance counselors need to guide kids to trade jobs, not just college. We agreed that there are too many teachers. In fact, we have three employees with teaching degrees.

Prior to the dinner, we were interviewed by a PR firm producing a video to sell Pennsylvania as a place to grow your business. I wish I did a bit better for that interview, but I think it was good enough for the short sound bites they needed. They said they will be visiting us in Erie to take some B-roll footage too. It will be exciting for us to be featured on a video about PA businesses!

We had a great time with our table-mates (Laurel Mueller of Soil Services Company and William Hindle of Hindle Power) who all won, talking with the Governor, and making connections.

Thank you Noelle (from Seda-Cog) and Linda (from Penn State SBDC) for nominating us and writing such a glowing description!